In August, 2008, we moved into our house on a 1/10 acre lot, and I began gardening with a single sheet-mulched plot in the front yard. I took a baseline set of soil tests from the front and back yards in January, 2009 and began a regimen of no-till, no-spray (i.e. no chemical amendments), no-manure gardening, using only plant-based mulch to maintain soil fertility while harvesting as many as 75 crops for market each growing season. The soil tests were done by our local university extension agency.

I should mention that I'm not opposed to the use of animal manure in gardening; I just don't have a convenient source of the stuff, while plant matter for composting is abundant. I was kind of curious what I could accomplish without using manure.

I took a second set of soil tests in 2011 to see if I was on the right track, and again this January (2017). The four test locations referred to in the graphs were as follows (click the links for some rather out-of-date photos and more information):

Without further ado, here is what I found. 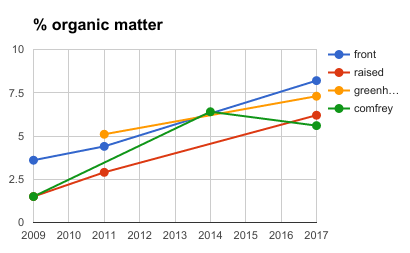 The front and back yard locations show a strong linear trend of increasing organic matter over time. Note that the back yard sample started out significantly lower in organic matter because of the subsoil that was brought to the surface during the sewer excavation, and it is now higher in organic matter than the front yard was when I started. The greenhouse, which also had some subsoil but received more mulch and compost than the other beds, had jumped to 5% OM by 2011, but by 2017 the front bed had modestly exceeded it, likely due to the prevalence of perennials in the front bed vs. annuals in the greenhouse.

The outlier here is the comfrey sample, which started out with subsoil like the "raised" sample, but jumped up in 2014, only to receed by 2017. It still has dramatically more OM than in 2009, but the decrease from 2014 is puzzling. More on that below. 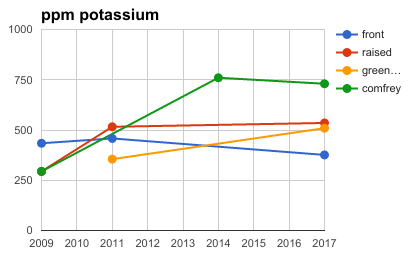 The main thing to note in the potassium (K) graph is that it's not decreasing. The lab report regards K levels above 250 as "high" for growing fruit and berries (in the front yard) and above 300 as "very high" (a notch beyond "above optimum") for vegetables in the other three locations. Since the K levels are largely unchanged over time, I attribute them to the composition of our heavy clay soil and not to what I've done, with the exception of the comfrey. Comfrey has a reputation as a "nutrient accumulator" plant with a specialty in K, and this appears to be borne out by the very high levels found under those plants. 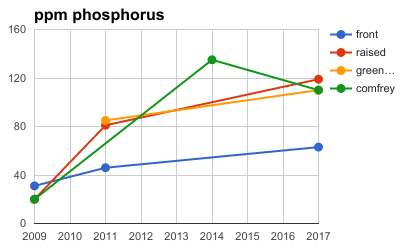 Similarly, the phosphorus/phosphate (P) levels we are experiencing are characterized as "high" or "very high" by the lab and appear to still be increasing. The rapid increase seen in the back yard samples during the first two years I can only attribute to the sheet mulching that I did, using giant ragweed (Ambrosia trifida) harvested from nearby alleys. Again we see a dramatic increase in P in the comfrey sample (though not as high as the K) followed by a decline. 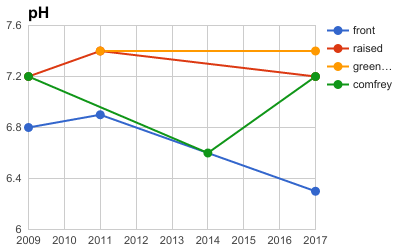 The pH of the back yard samples is fairly stable, slightly more alkaline than desirable for vegetable gardening, but that's to be expected with our limestone-derived clay soil. High pH can keep vegetable plants from obtaining some minerals they need for health. The lab recommends adding sulfur to the soil to lower the pH, which I am reluctant to do. The front yard is getting more acidic over time, which is good for the berries and fruits that I grow there. I attribute this mostly to the lower elevation of that spot; the ground is often waterlogged in the spring and fall and so may harbor anaerobic decomposition, which is more acidic. Additionally, there are more trees and other woody perennials in the front yard than in the back (where utility lines prevent me from planting trees), and they are known to harbor more fungal mycelium relative to nonwoody annuals, which can lower the soil pH. The comfrey sample is again an outlier on this graph, appearing unsure whether it wants to be like the front or backyard samples! More on that below. 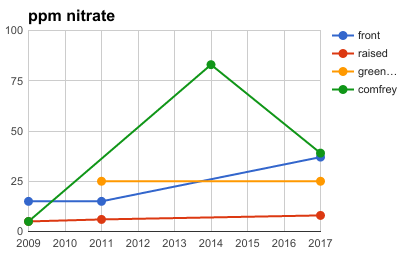 As with the potassium, the main story being told by the nitrate graph is that soil nitrogen is not decreasing. This is in spite of 9 years of constant fruit & vegetable production, with no chemical or manure inputs, and appears to disprove the conventional belief that food production depletes soil nutrients. I've grown "nitrogen fixing" plants such as beans and peas in the greenhouse, but as you can see the nitrate levels are actually higher in the front yard where no such plants were grown. It bears repeating that the only fertilizer I've applied is compost from plant sources, and yet nitrate is not being depleted. I take this to mean that my soil bacteria are healthy and able to fix nitrogen on their own.

Again, the comfrey sample is a bizarre outlier. Let's talk about that.

what about the comfrey?

The simplest explanation for why the 2014 comfrey sample is an outlier on all four graphs is that the test went wrong. Unfortunately I didn't suspect anything at the time; in fact the article I wrote about comfrey at the time held up the soil test as proof of the dramatic effect it has on the soil chemistry. Since I can't go back to 2014 and re-test, I'm going to move forward with the assumption that the test was correct. What then?

It's worth noting that the comfrey plants growing now are the same ones that I planted back in 2008. They grew to mature size in approximately 3-5 years, and then they stopped growing larger. My guess as to what we're seeing in the graphs is that comfrey's famed accumulation of nutrients (and building of organic matter) is mostly accomplished in the first few years after transplanting, and in maturity the plants use up the nutrients they've saved up, like a retiree spending her pension. Further increase (if it were desired!) would only be accomplished by dividing the plants so that they could grow more.