Important: Read this retrospective before attempting to build this design.

A couple years ago I published my design for what I modestly called The Ultimate Rain Barrel System, because it elegantly solved all of the problems I'd encountered with using 55-gallon plastic drums for water catchment, using a bit of cleverness called a self-priming siphon. A year ago I installed such a system at a friend's house, and what do you know, it worked exactly as designed! As a designer/inventor, I'm really happy with it.

Unfortunately, to the casual observer, it looks way more complicated than necessary. There's a heck of a lot of plumbing, which is not cheap, nor particularly attractive, even after being painted to match the house. The snorkels sticking up from each barrel look particularly ridiculous. So ever since then I've been thinking about a simpler way to accomplish the same goals. Doing so meant giving up on the self-priming siphon, but the siphons can still be manually primed pretty easily. 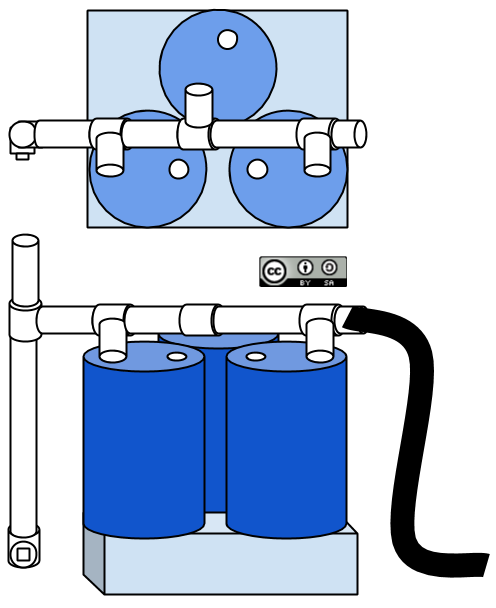 In a nutshell, the simpler design involves sending the water on an initial trip down a first-flush trap, then across the tops of several barrels (I've shown three) through plumbing that is permanently attached to the openings on the top of each barrel. Water flows into each barrel in turn, with air escaping through the same opening where the water enters, relieving the need for a snorkel in the second opening (which should be capped to prevent overflow). When one barrel fills up, the water continues down the pipe to the next one. When all barrels are full, the water continues to flow away from the building to the lawn.

Advantages of this design over the self-priming one:

Disadvantages of this design:

Fortunately, starting a siphon with a length of garden hose is not that tricky. Just stick the hose well down into the barrel, cap or cover the end of the hose, pull it out and down until all of the hose that was above the water is below water level, and release the end. You can then attach a longer garden hose to get the water where you want it, and push the end of the siphon back down deep into the barrel to drain it all the way to the bottom. When one barrel is empty, repeat the process for the next.

What do you think? Let me know!