People often ask me what I think about greenhouses, as a permaculture designer. I've been meaning to write this article for so long that I was beaten to it; Kris de Decker wrote an excellent article, Fruit Walls: Urban Farming in the 1600s followed by Reinventing the Greenhouse. Both articles are well researched and thoroughly illustrated, and they go a long way toward explaining why simply enclosing a bunch of outdoor space in glass or plastic is not a sustainable solution, and what we should do instead. But in the interest of brevity, let me lay it out for you before I go on to add my own piece to the puzzle. 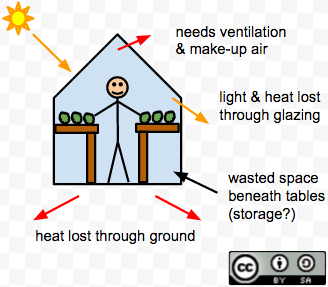 When people say "greenhouse," what they usually mean is a glasshouse (diagrammed at right), an above-ground frame of metal or wood sheathed entirely in clear glass or plastic, tall enough to walk in, and enclosing garden soil, raised tables, or both. The intention of this design is to benefit from the greenhouse effect by trapping both radiant heat and heated air inside the structure. But in practice, a number of problems arise:

An alternative design for smaller structures 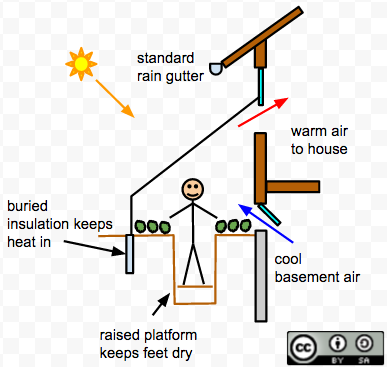 Kris de Decker's Reinventing the Greenhouse does an excellent job of describing and illustrating how a glasshouse can be built against a masonry wall on a farm scale. What about the household scale? I've borrowed some ideas from Mike Oehler's designs for greenhouses attached to underground houses (as well as Bill Mollison's oft-cited, rarely implemented design for a chicken-heated greenhouse) and attached this design to the south/sunward side of a house with a basement. Improvements include:

The end result, ideally, would be a small glasshouse that can heat itself and contribute heat to the adjoining house without the need for an external heat source at night.

Potential drawbacks of this design include the higher cost of digging the sunken path and reinforcing its sides against soil collapse, as well as burying the insulation. Also, the soil next to the foundation of older houses can sometimes be contaminated with lead paint and/or pesticides. Please take these factors into consideration when deciding whether to try this design yourself. 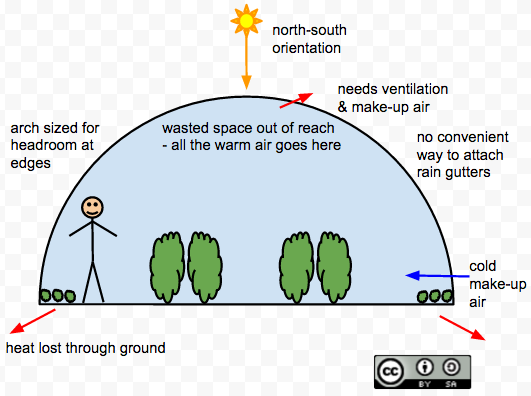 Here in Kansas, hoop houses (also called high tunnels or polytunnels) have become very popular on small farms: with the help of state government subsidies and loan programs, they are replacing not only glasshouses but also low tunnels, cold frames, cloches, and any number of other venerable technologies. Advocates say that they can pay for themselves in 3 years or less by extending the growing season and allowing farmers to get produce to market at the most profitable times. Their chief benefit, compared to the technologies they replace, is that they are very inexpensive to build. Here are some of their limitations:

An alternative design for larger structures 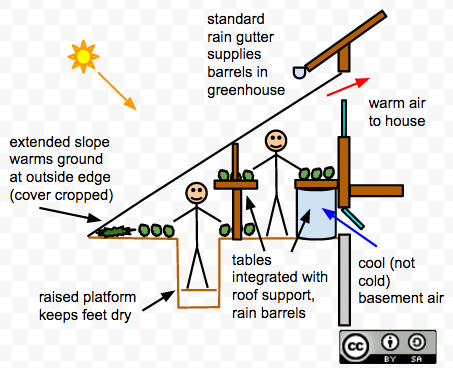 Suppose you want to have the growing space of a hoop house without the drawbacks? My redesign again calls for putting it against the south wall of a building -- this could be a barn or a pole building instead of a house, but ideally it would have vents both low and high like the basement and first-floor windows of a house. Here are the advantages:

Potential drawbacks are the same as the smaller design, though the amount of digging is reduced.

Please note that I have not yet implemented these designs, but I am eager to do so! I welcome your feedback and improvements. Please let me know what you think!