This was the first design we implemented at Interdependent Web Urban Farm.  As such, it needed to produce a yield the first year even as we looked ahead to future years.  For this reason we designed a succession planting: we planted everything at once and allowed some crops to die out each year and be replaced by the gradually maturing perennials.  The location is downhill from most of our yard and the neighbors', so it needs to deal with very moist soil.  And as a front-yard planting, it also has to be reasonably attractive!

The long term goal is to have a pear tree guild: the planting will be dominated by a pear tree surrounded by plants that support it.  However, the tree will take many years to reach maturity, so in the meantime we are growing other crops on the same site.  This is complicated by its proximity to the black walnut guild -- some of the crops become less productive as the toxic walnut roots encroach on them.

Photo album of this location 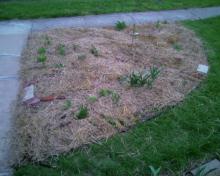 The second year (2010), the only annuals remaining were ones that seeded themselves: amaranth, arugula, dandelion, lamb's quarters, tyfon, violet, wood sorrel.  Perennials making a debut this year were camas and red raspberries.

The third year (2011), the plot was dominated by raspberries, strawberries, mint, comfrey, and onions.  We continued to interplant edamame and tyfon in any available gaps. 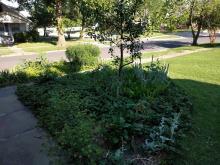 In subsequent years, the plot was dominated by strawberries and mint, with the raspberries dwindling down to a single plant by 2017. The pear tree produced its first flowers in 2016 and its first pear in 2017. Somewhere along the way we planted some horseradish -- a bad idea, since harvesting it means disturbing the tree roots, and without harvesting it spreads!